Love is in the air with these two who are saying ‘I DO’ in downtown houston! Nicole & Ryan decided to include their sweet pup in their engagement photos, and we are loving their little family! We love the colors in this feature and the authenticity that is so evident through these romantic photos. These photos represent them walking through life TOGETHER which is just what marriage is all about. Enjoy! 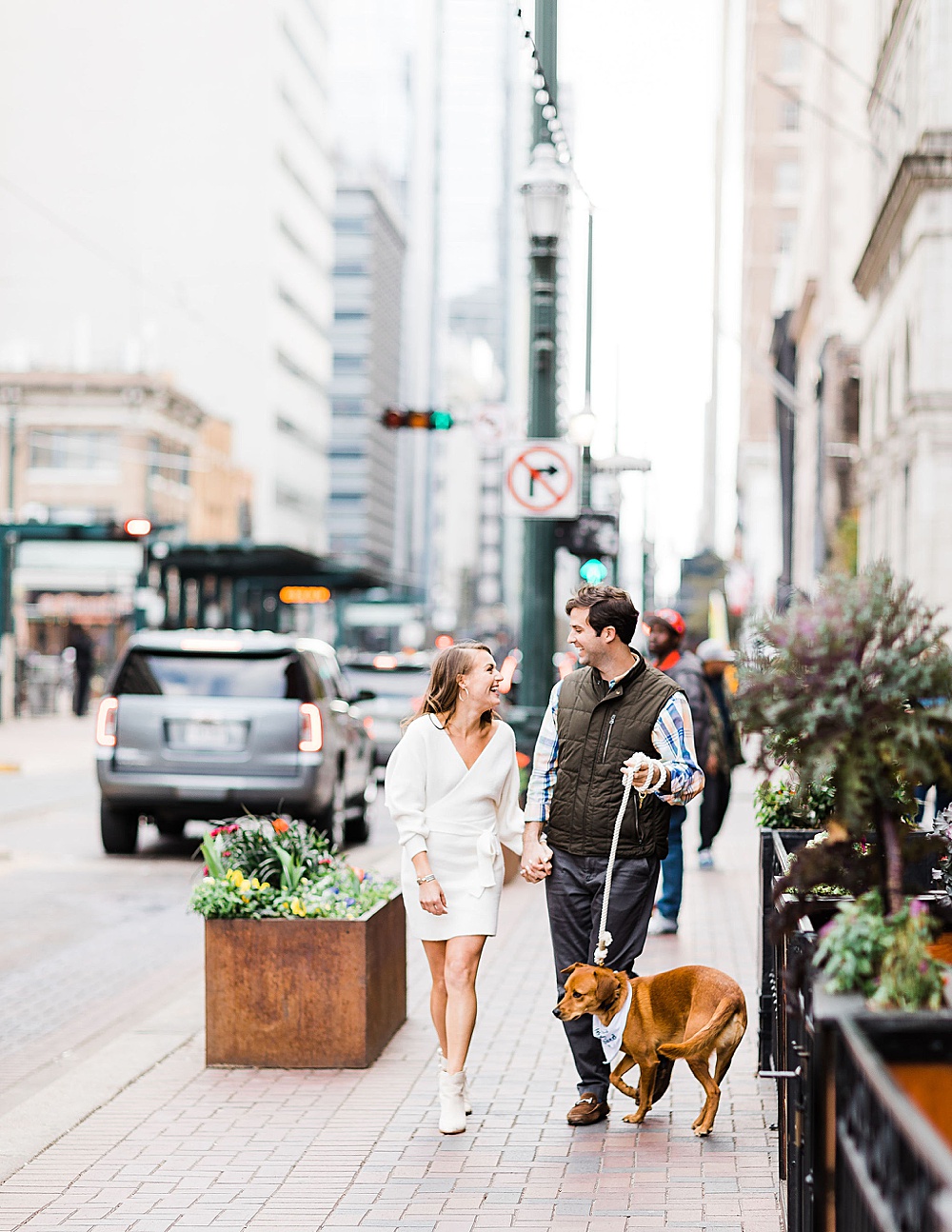 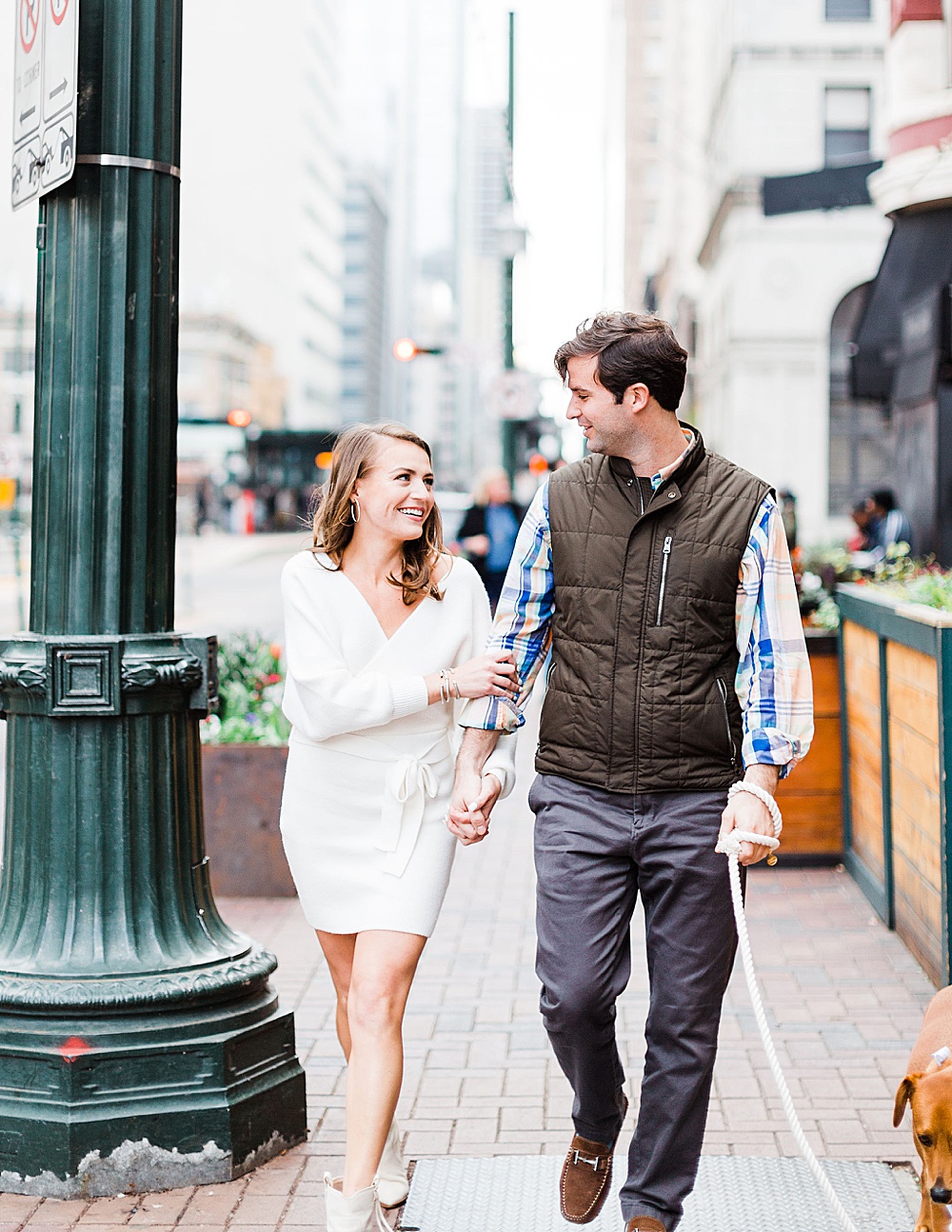 From the Photographer: Nicole and Ryan are one of those couples that just plain work. Their chemistry is undeniable and their humble nature is so comforting. When we set out to plan Nicole and Ryan’s engagement session, the one thing Nicole and Ryan knew they wanted was something that incorporated their fur-baby, Wrigley, affectionately named after Ryan’s love for the Chicago Cubs, and a location that represented their modern way of life. We thought of no better location than the streets of Downtown Houston. We frolicked between sky scrapers, popped into a coffee shops and bars, and went up high to the top of a parking garage to capture the perfect vibe for Nicole, Ryan, and Wrigley. 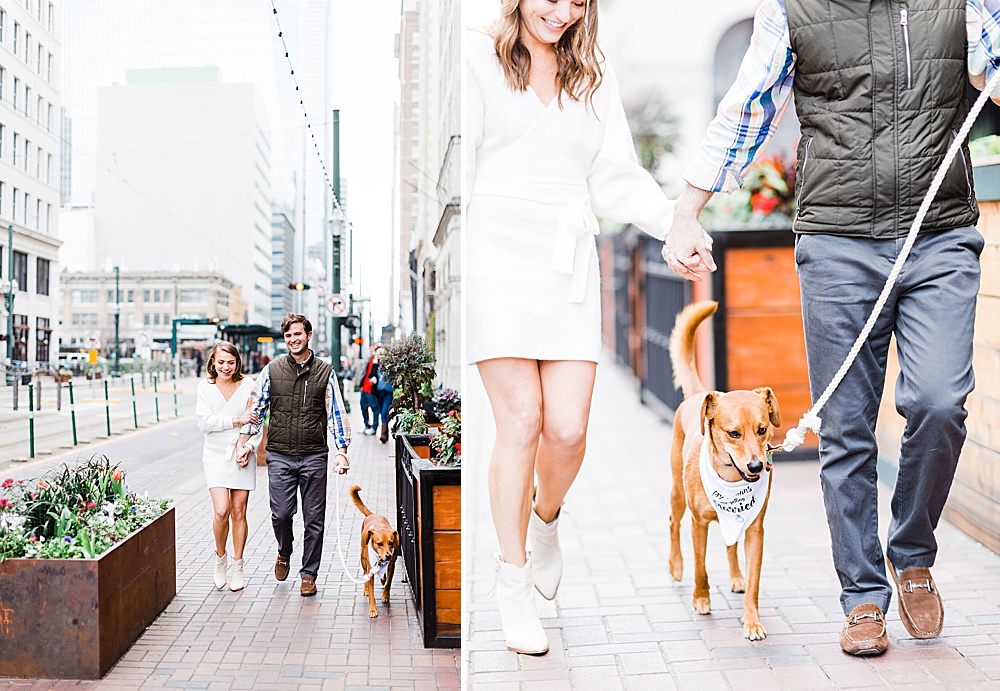 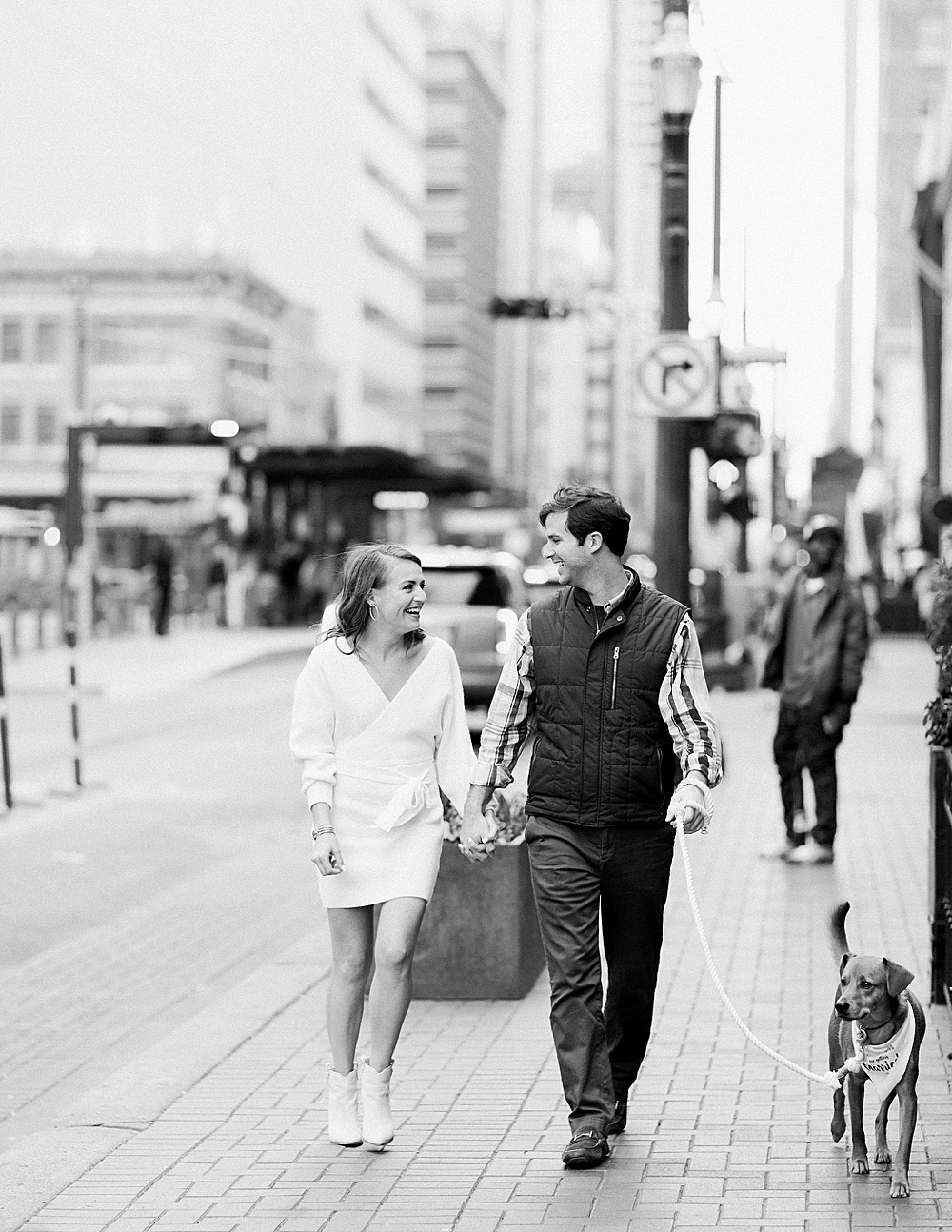 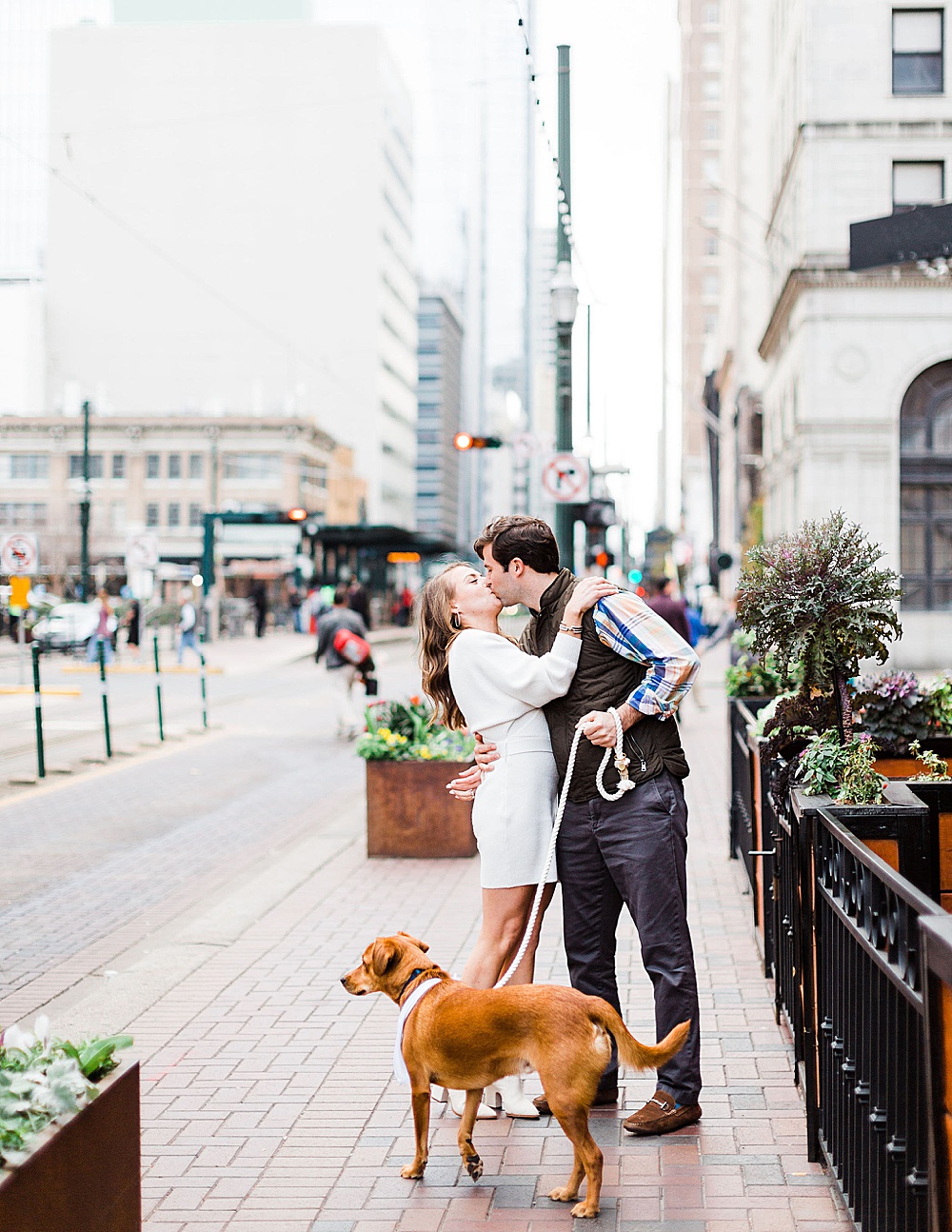 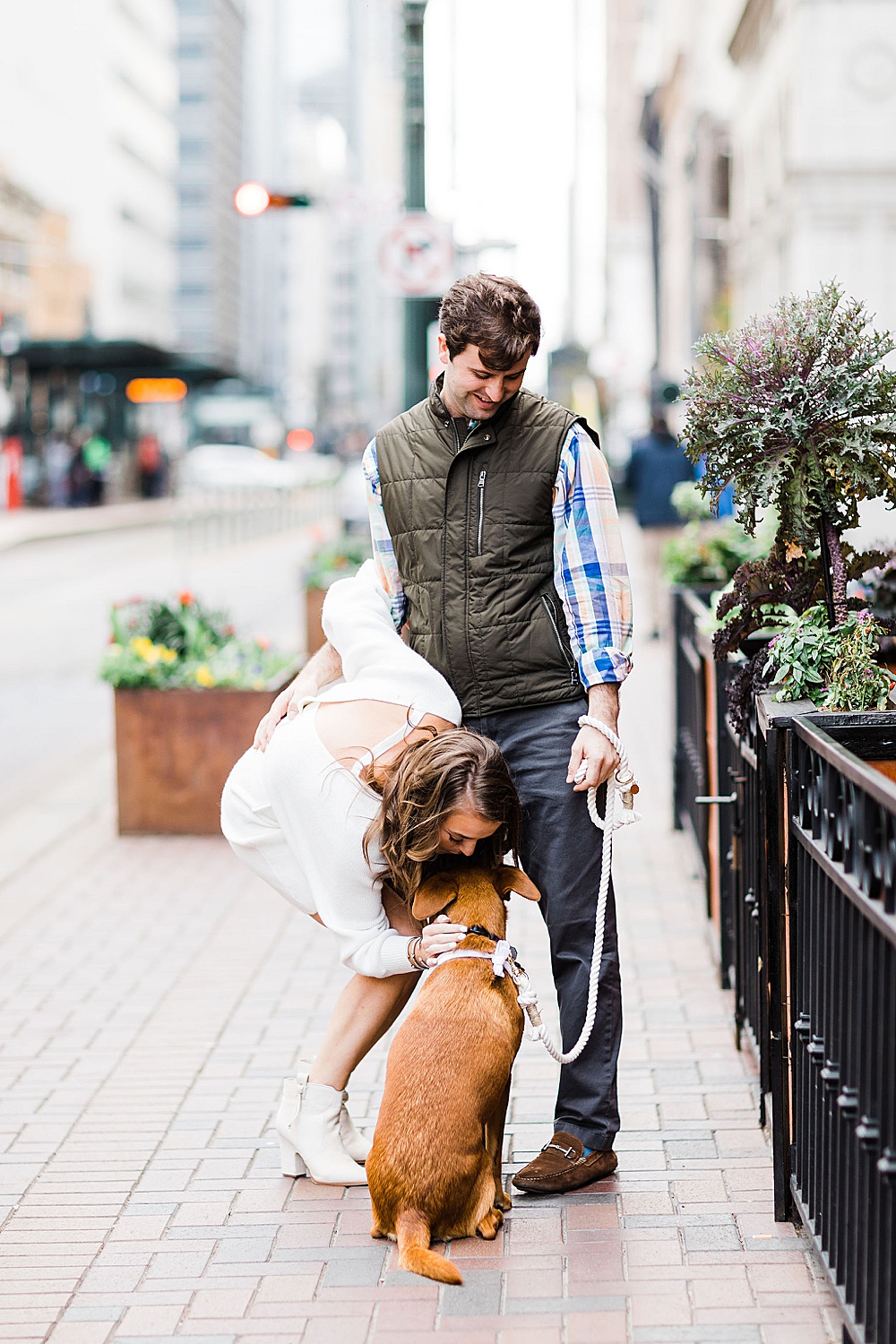 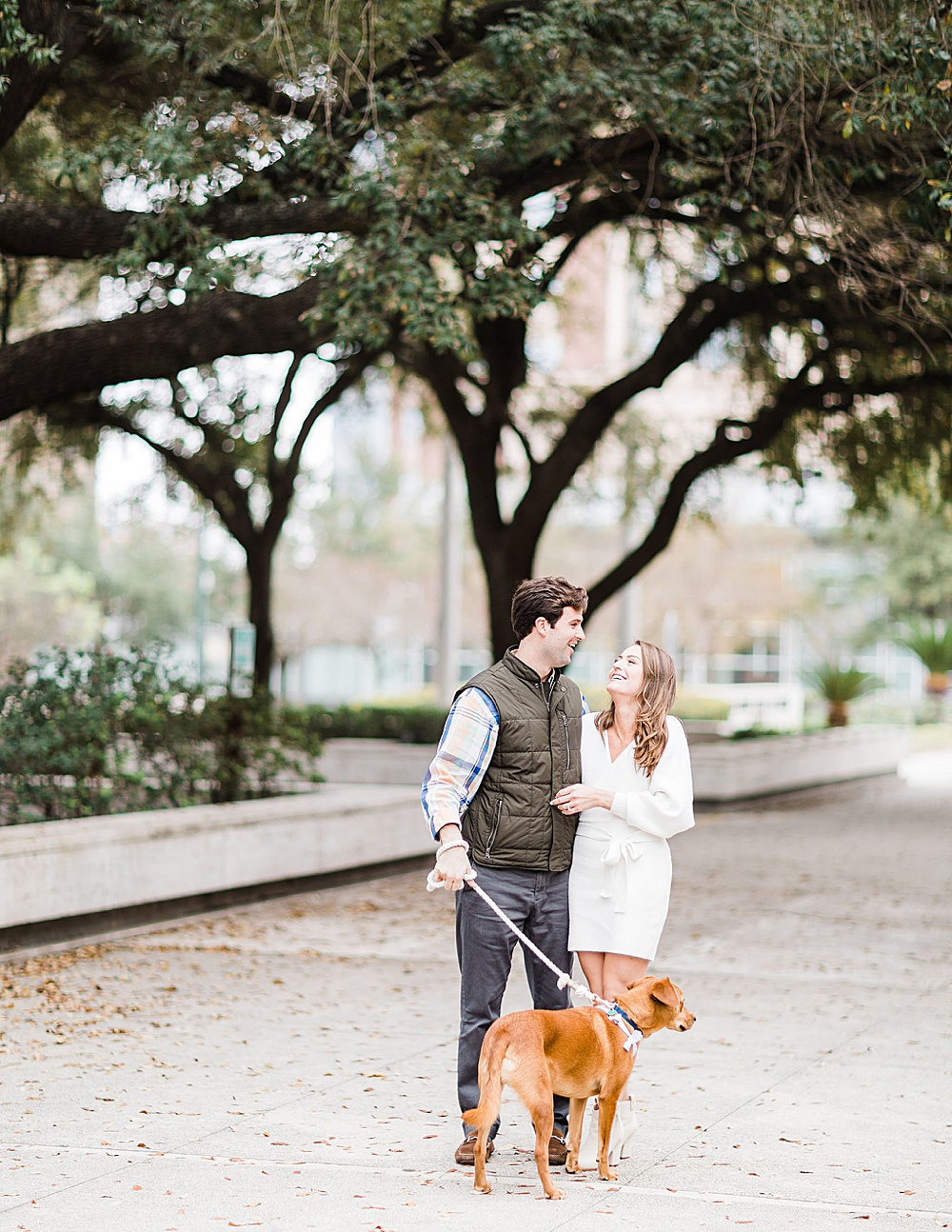 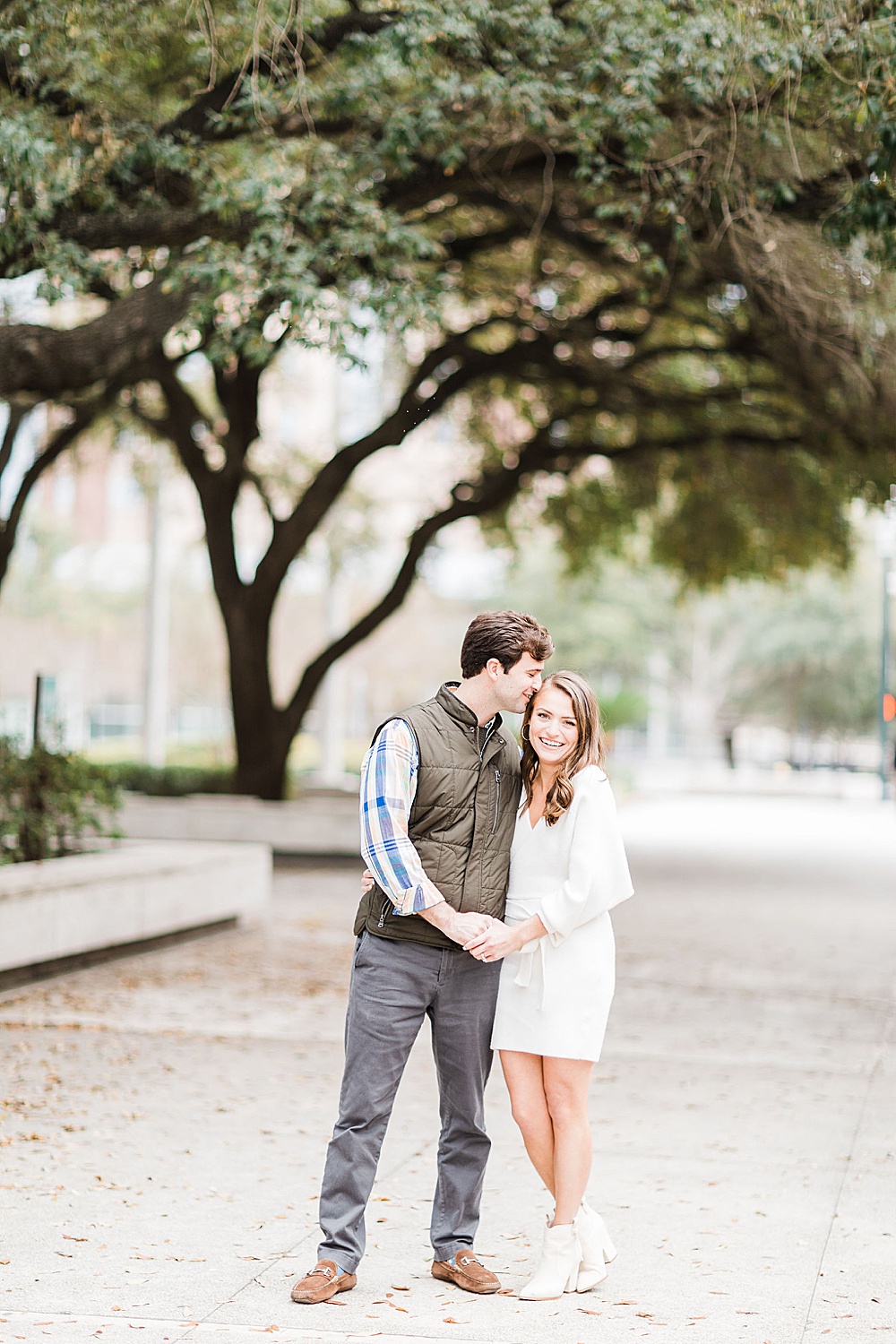 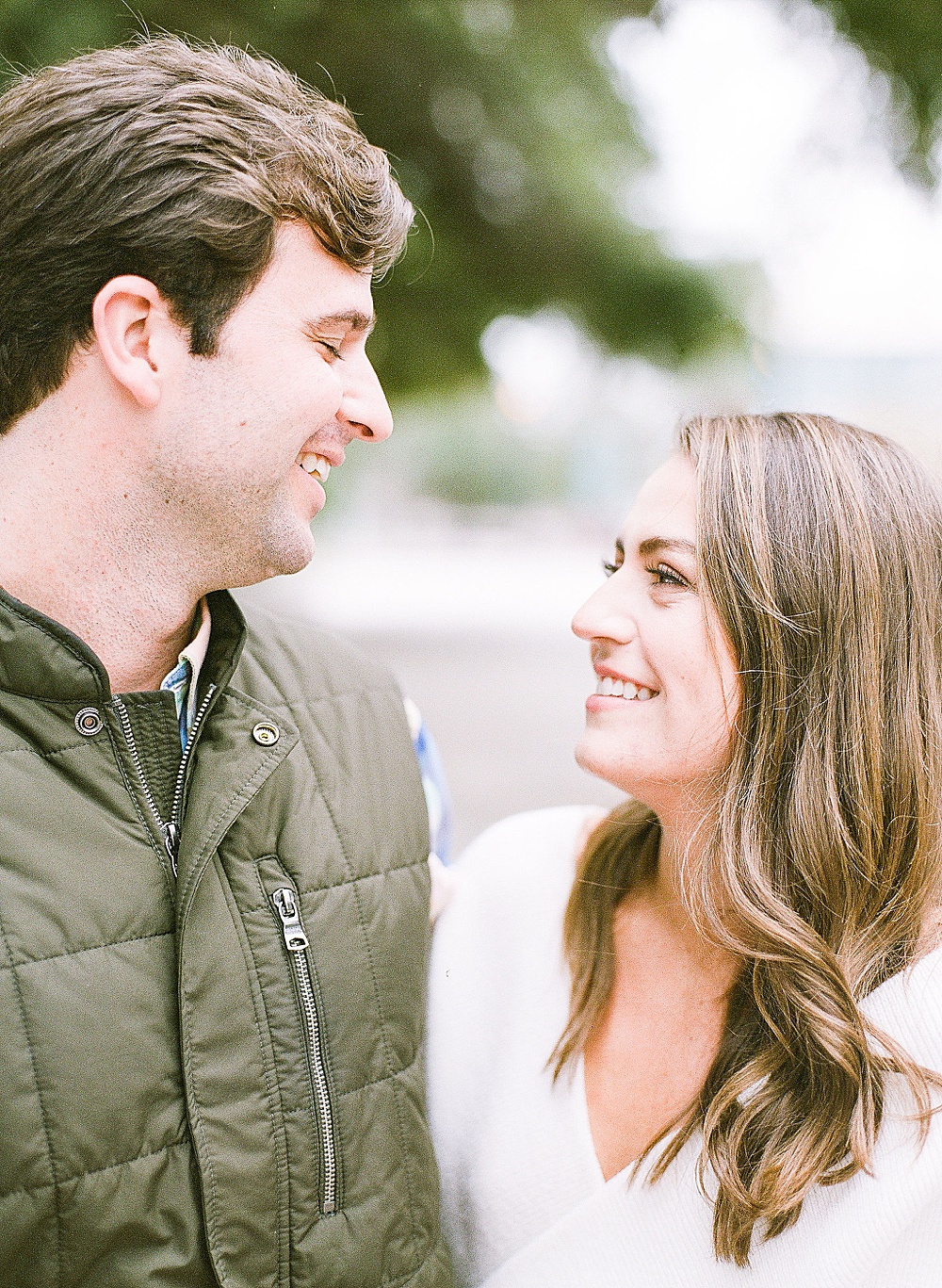 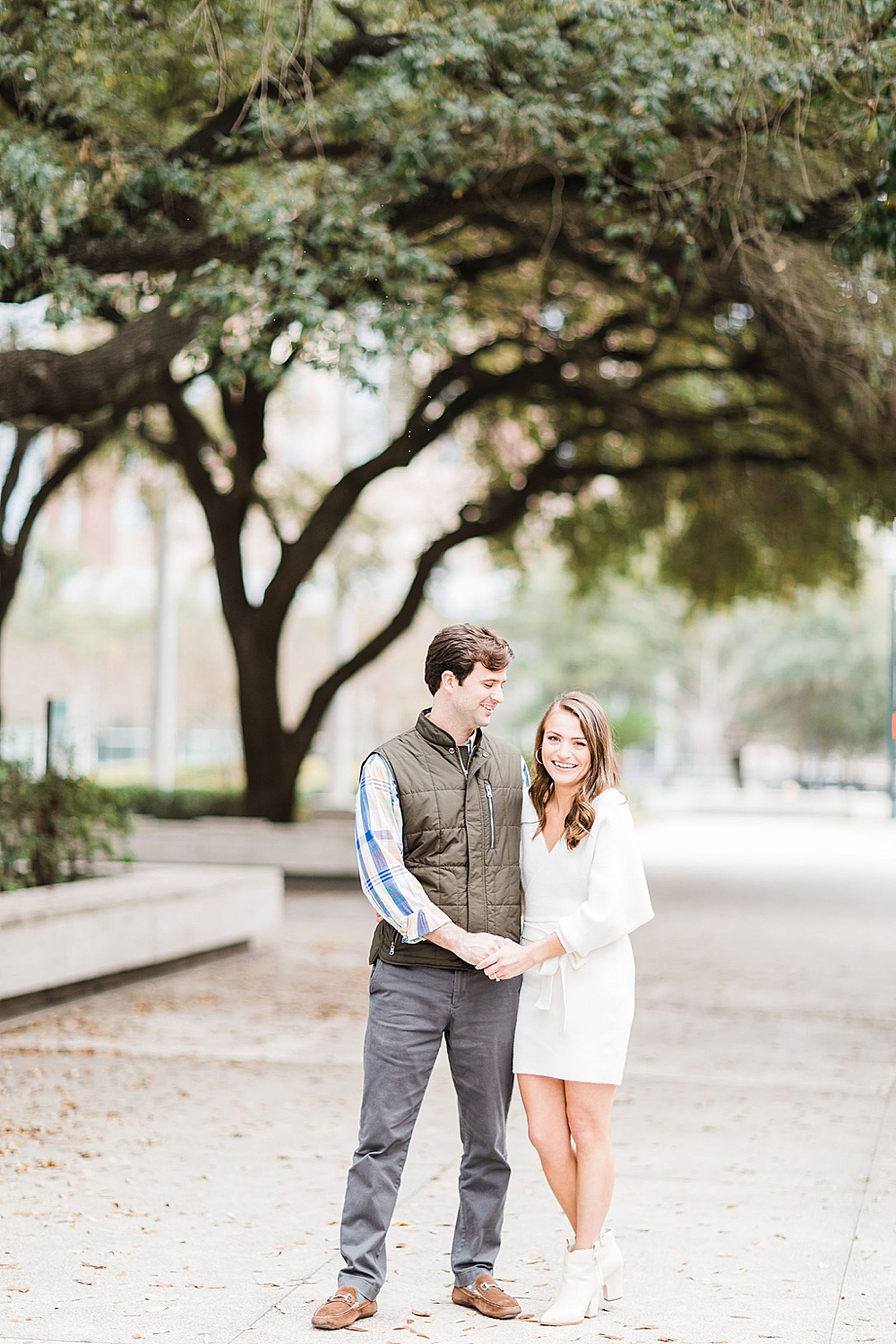 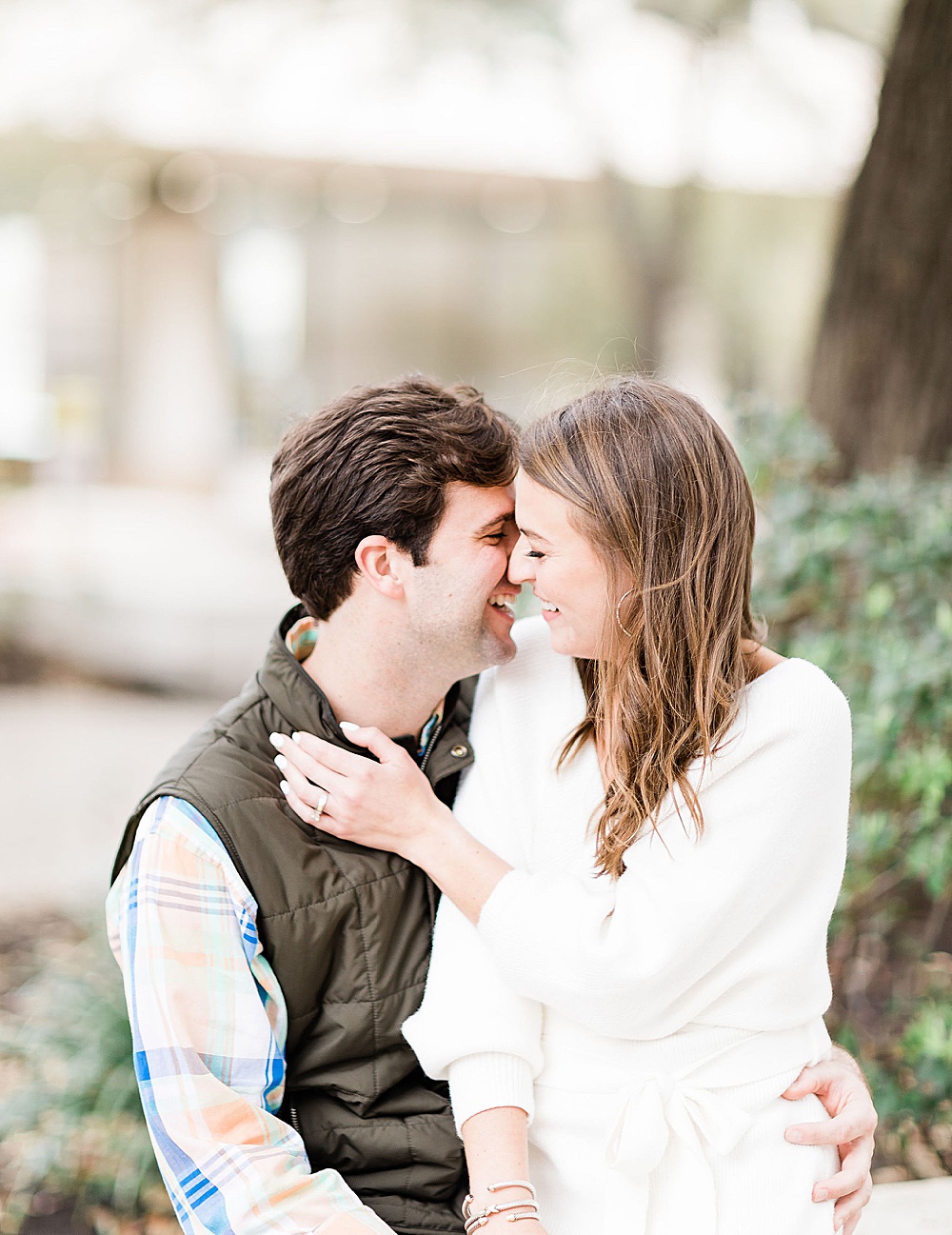 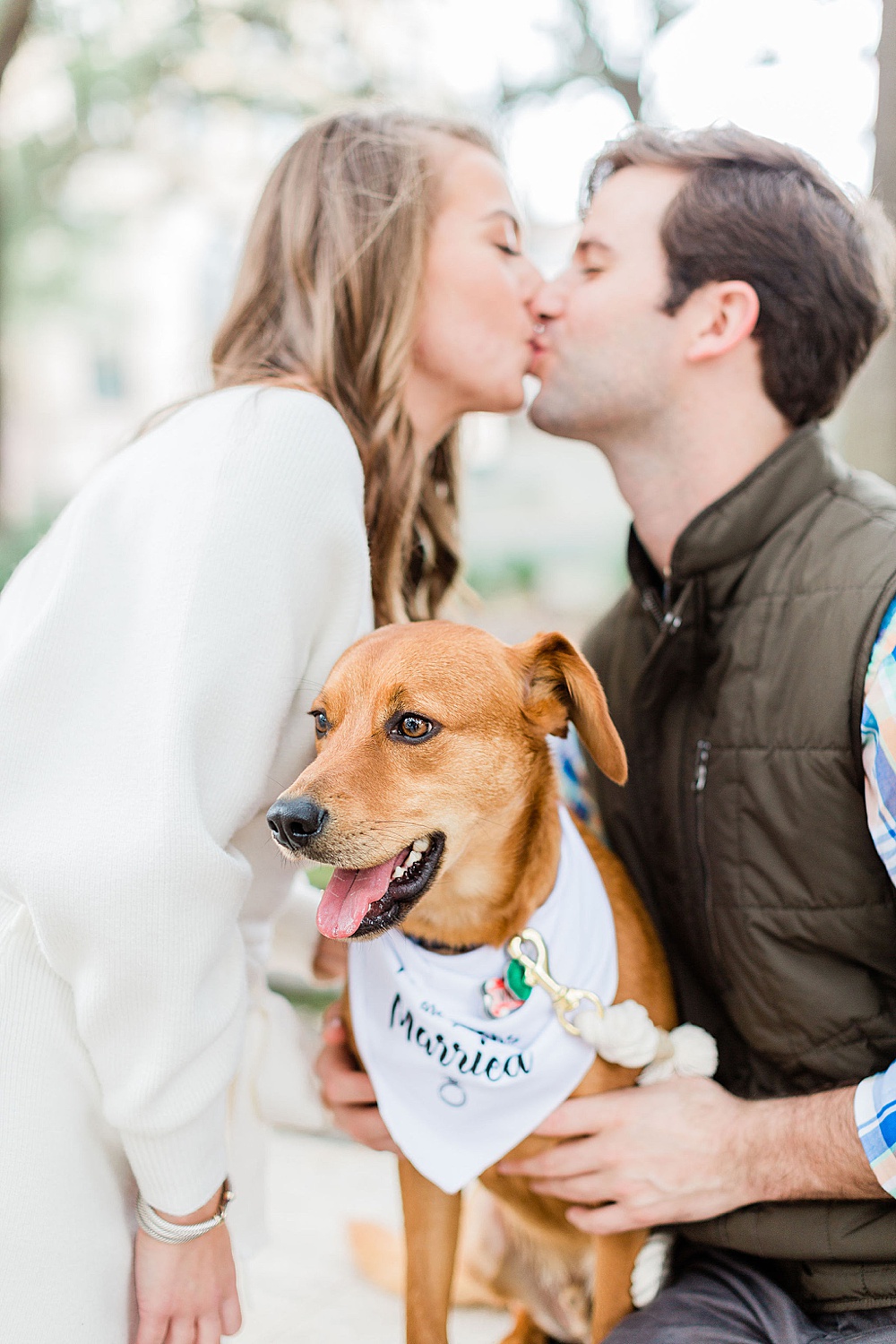 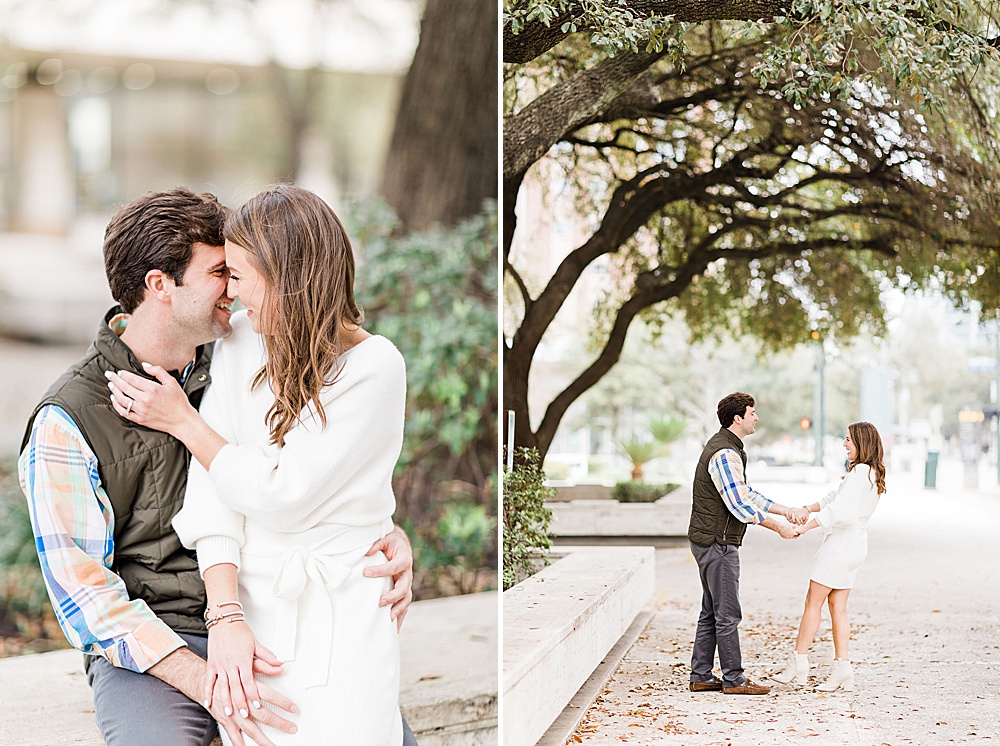 How did you meet?

Alright, y’all ready for the truth, the whole truth and nothing but the truth? Well, here we go. It all admittedly started when I was scrolling The Gram and came across a photo of this “bad*** woman in business” and a friend of mine from Tulane that Nicole was mentoring at Wells, Nicole was still in her clubbing phase. Within a few hours I start inquiring about this young Cameron Diaz look like, and it turned out lucky for her she was still single. Over the next couple of weeks I keep trying to convince the friend to introduce the two of us but this Romeo was forbidden from his Juliet.

Fast forward to Thursday, July 28, 2016, and I had just finished working out when the mutual friend invited me out to a post work happy hour. I originally didn’t want to go because it would require too much effort to get ready. However, my roommate was too busy studying for his Series Exams to hang out, he was also working with Nicole but hadn’t started full time in the office yet, and the next day was my Friday off so I figured what the heck and went to the happy hour at Kirby Ice House. About an hour, and a couple vodka waters, later, here walks in the young Cameron Diaz from The Gram in her white ripped jeans and black top and guess where she sits? Yeeeep, in the empty stool right next to me. It’s safe to assume my palms were sweaty and weak arms were heavy, but it was Houston in the dead of summer so there wasn’t a sweater and my mom can’t cook spaghetti and like a young Alexander Hamilton, I was not gonna throw away my shot.

Nicole proceeds to introduce herself and when she tells me she’s from Midland, I immediately fire off  “Oh you from Midland like the movie Friday Night Lights” apparently that was my “best shot” because she just looked at me rolled her eyes and goes “yeeeep”. Luckily, I recovered from that blunder and “we” start sharing stories, I also drink more vodka and waters, for the next five hours. We end up closing down Kirby Ice House and have to leave. At this point all I can think about is not messing this up and that I HAVE to see her again. We leave to go outside and like a gentleman, I offer to call her an Uber, but turned out we lived within a mile of each other so we decided to share the Uber to our respective apartments. While waiting on the Uber, the only time I’ve been happy to see a driver get lost picking me up, I found a reason to wrap my arms around her and eventually she FINALLY made the first move and kissed me. Eventually we get in the Uber and she snuggled up next to me while we talked to the driver about golf and when we arrive at her apartment complex I get out, kiss her say “we should do something this weekend”. She just looked at me and said “well we can’t because you never asked for my number.” Fortunately, she decided to give me her number and we texted for another hour or so, because I went home like a gentleman, and after her blowing me off on Friday night, I organized the perfect first date on Saturday.

That next week we hung out every night watching movies and eating Blue Bell Ice Cream, which is still the second best brand of ice cream behind Mayfield. We started dating at a White Linen Night party when I, after a day of drinking Skip and Go Nakeds and eating Vodka gummy bears, introduced her as “my girlfriend Nicole”. Since that day over three years ago, we’ve traveled to four countries, twelve states, adopted a puppy and most importantly, watched the Cubs win the World Series. If that was the preclude to our life together, I can’t freaking wait to read the book. 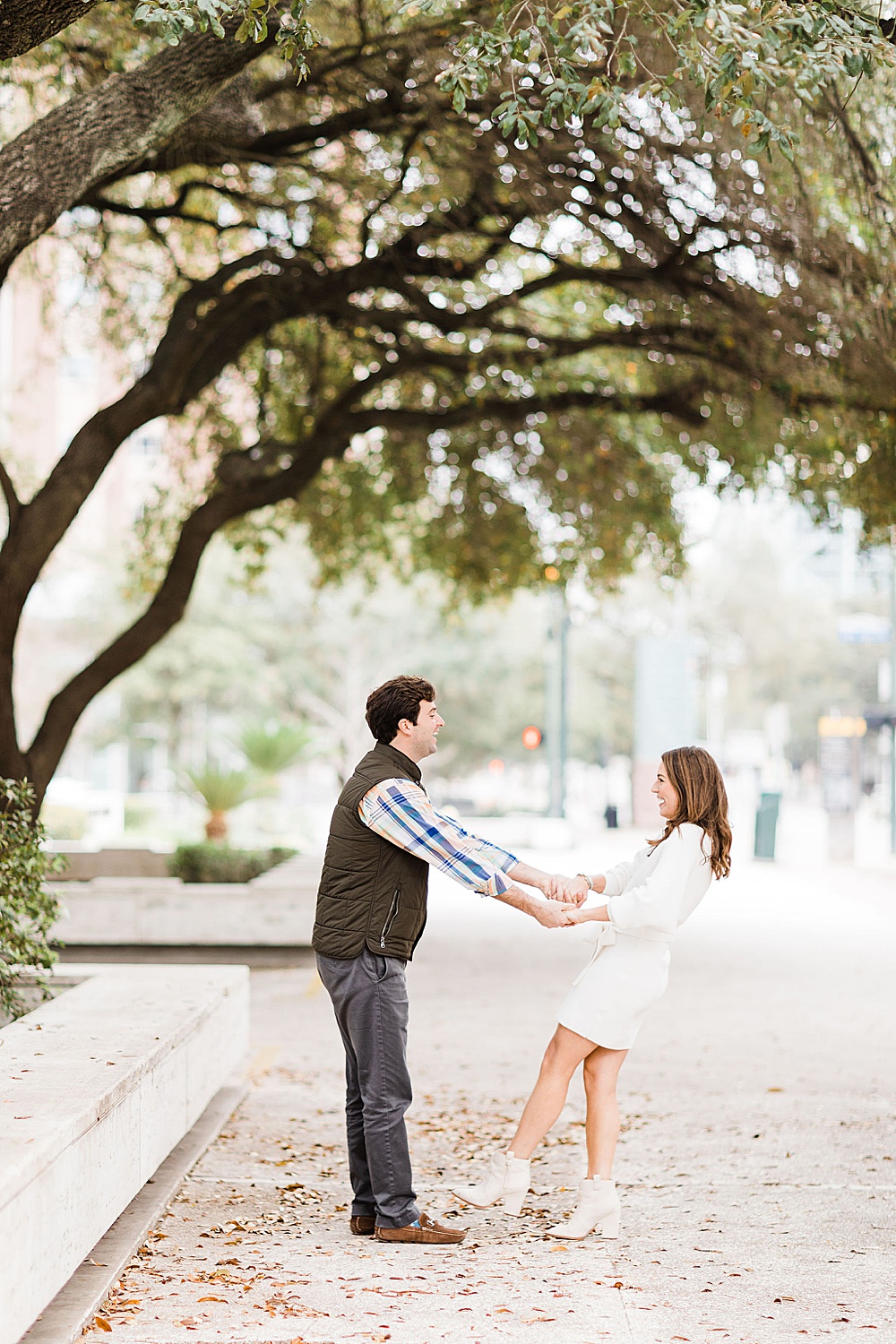 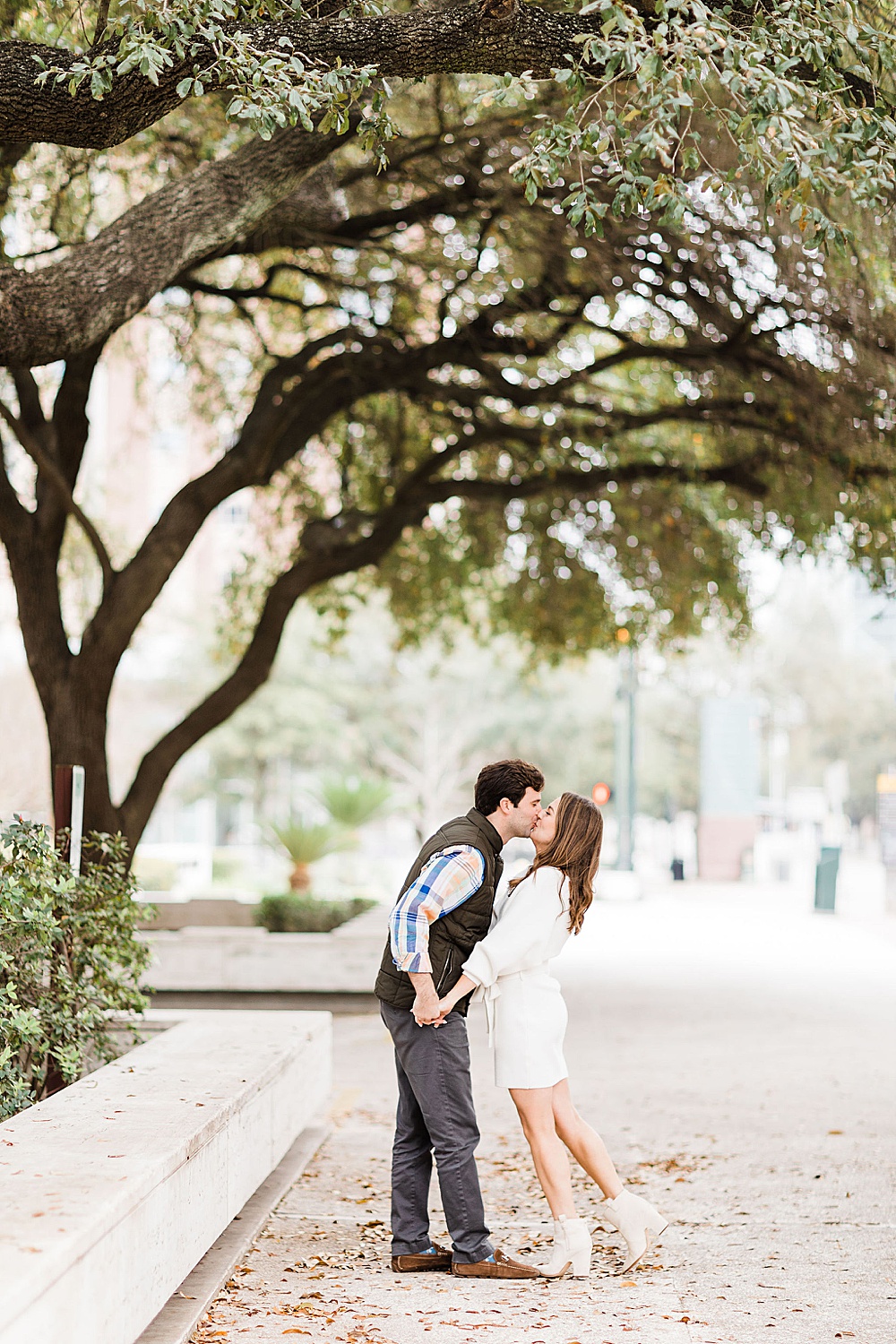 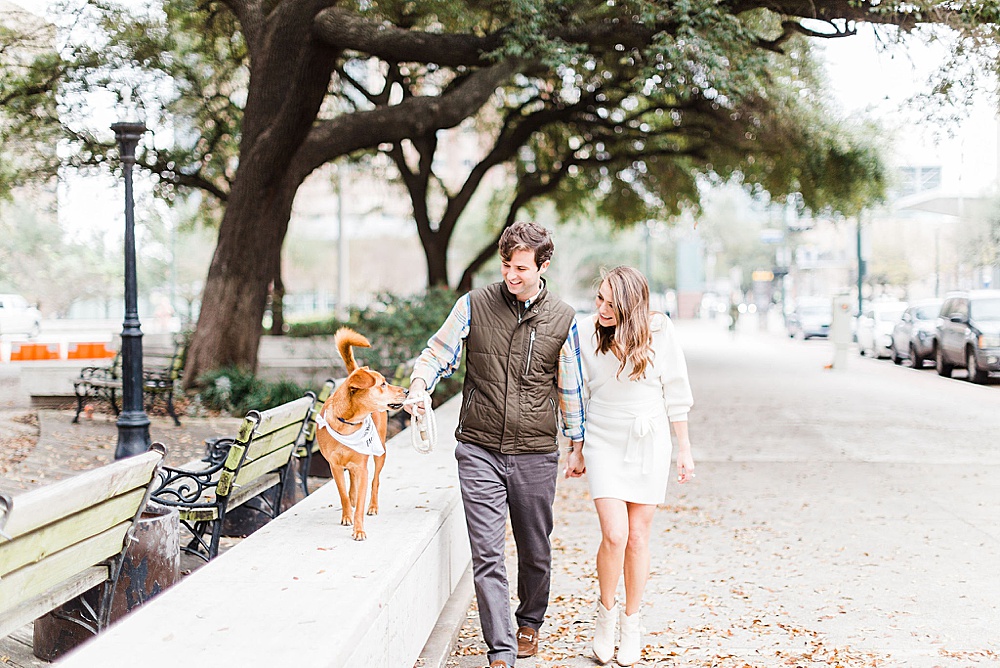 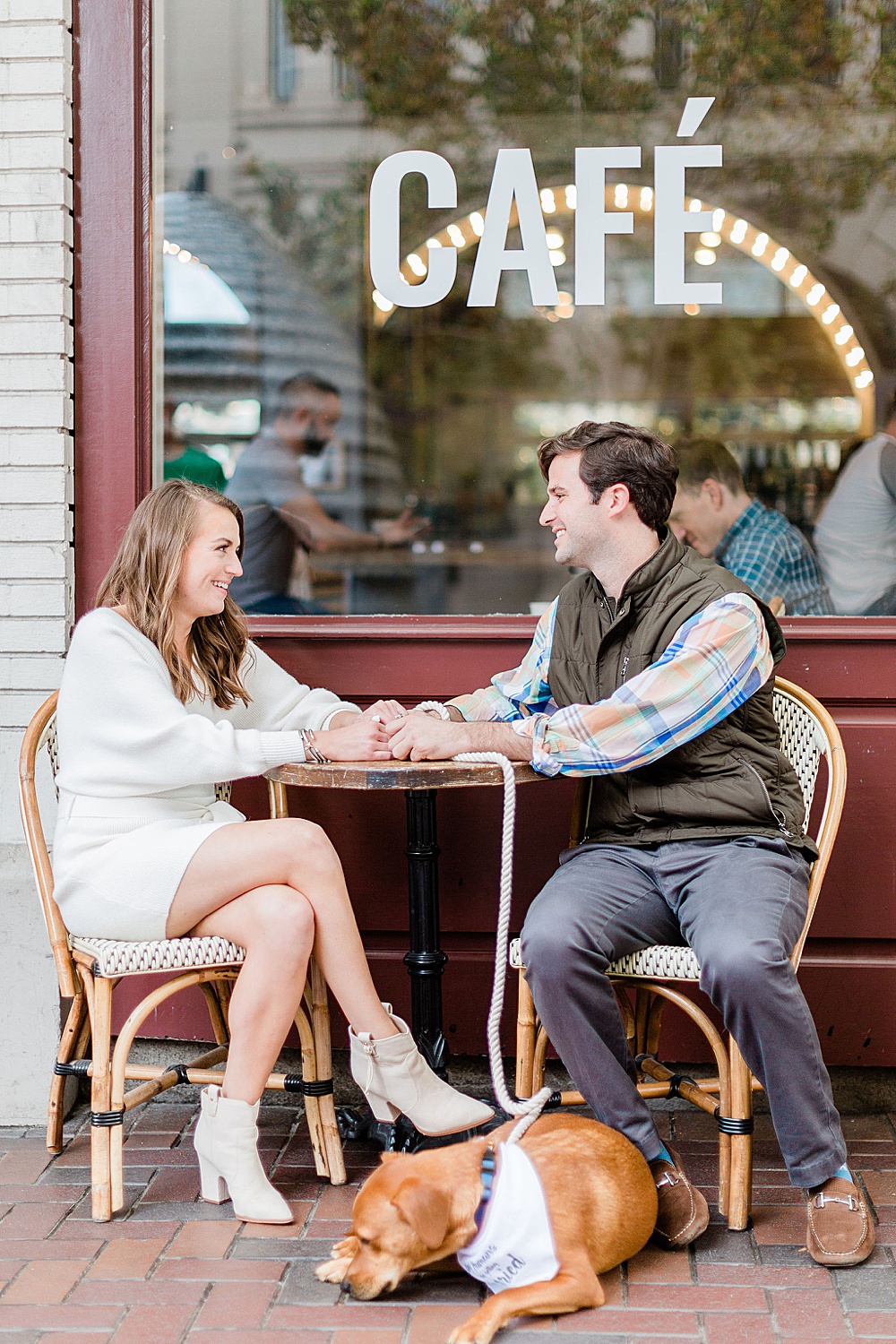 We heard there is a wedding ring story. Want to tell us?

To understand the band’s importance, it’s important to understand Ryan and his brother, Justin’s, relationship with their godparents, David and Valerie Wooley. Growing “Uncle” David and “Aunt” Valerie were like a second set of parents for Ryan and Justin with Aunt Valerie often being the “emergency” contact to pick them up from school early. Uncle David was also the one that insisted Ryan visit his alma mater, Mississippi State University, with him in 2008 which ultimately led to Ryan attending school there as well. Ryan was given Uncle David’s Mississippi State class ring when he died and it’s something Ryan cherishes.

When Aunt Valerie heard Nicole wanted a platinum band for her ring, she offered Ryan the band that Uncle David had given her on their 25th wedding anniversary. The band is truly unique being platinum with a hint of gold down the middle and baguettes on each side of the diamond. With the band in hand, all Ryan had to do was pick the perfect round cut diamond Nicole wanted. For that, he went to Kimball’s Jewelers in Knoxville, and they did a fantastic job of not only helping him find the perfect diamond but also mounting the diamond onto the ring. Which was tricky given the ring previously had a diamond mounted. We feel confident to say Nicole’s ring is one of a kind and she couldn’t be more honored to wear a ring of that significance. 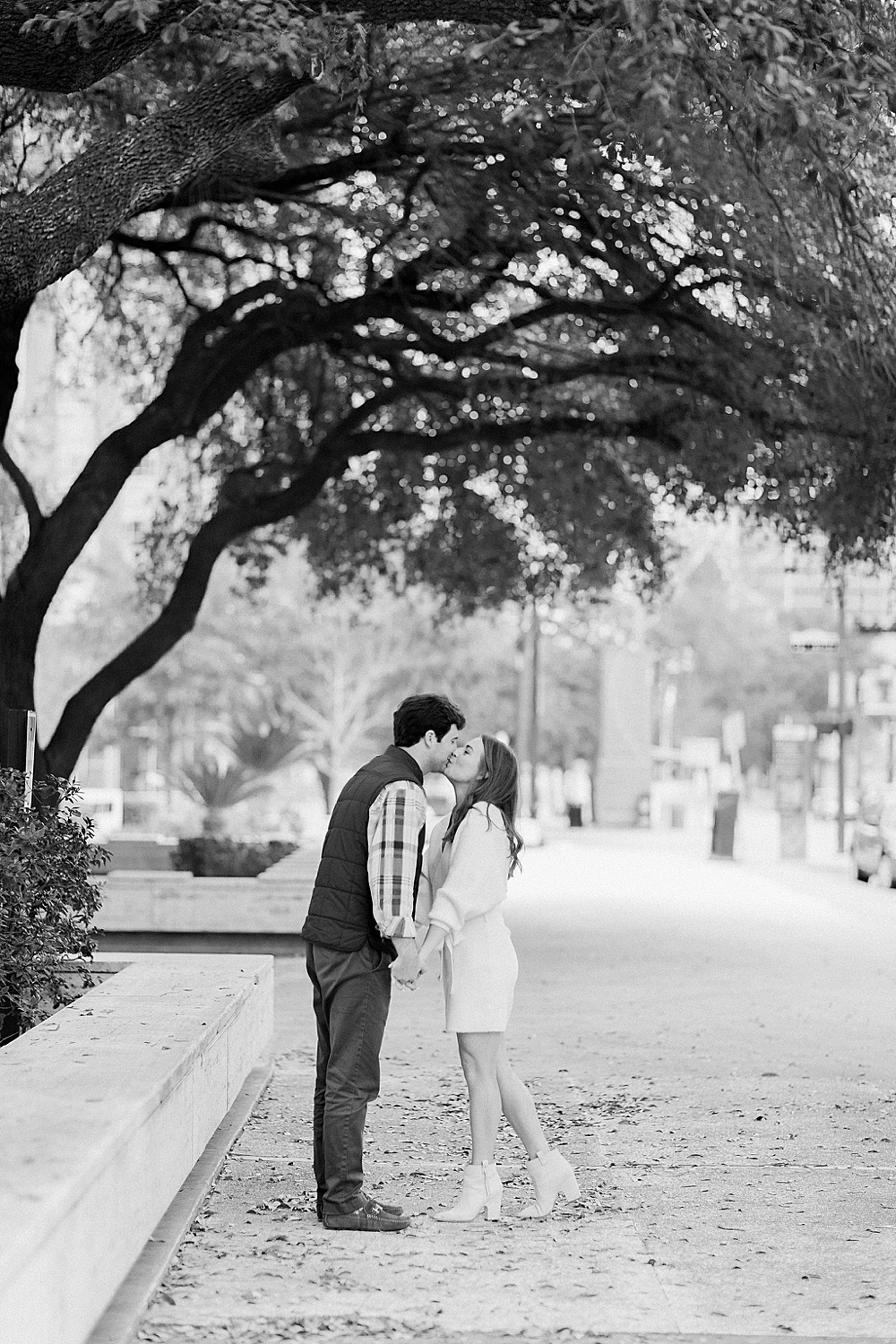 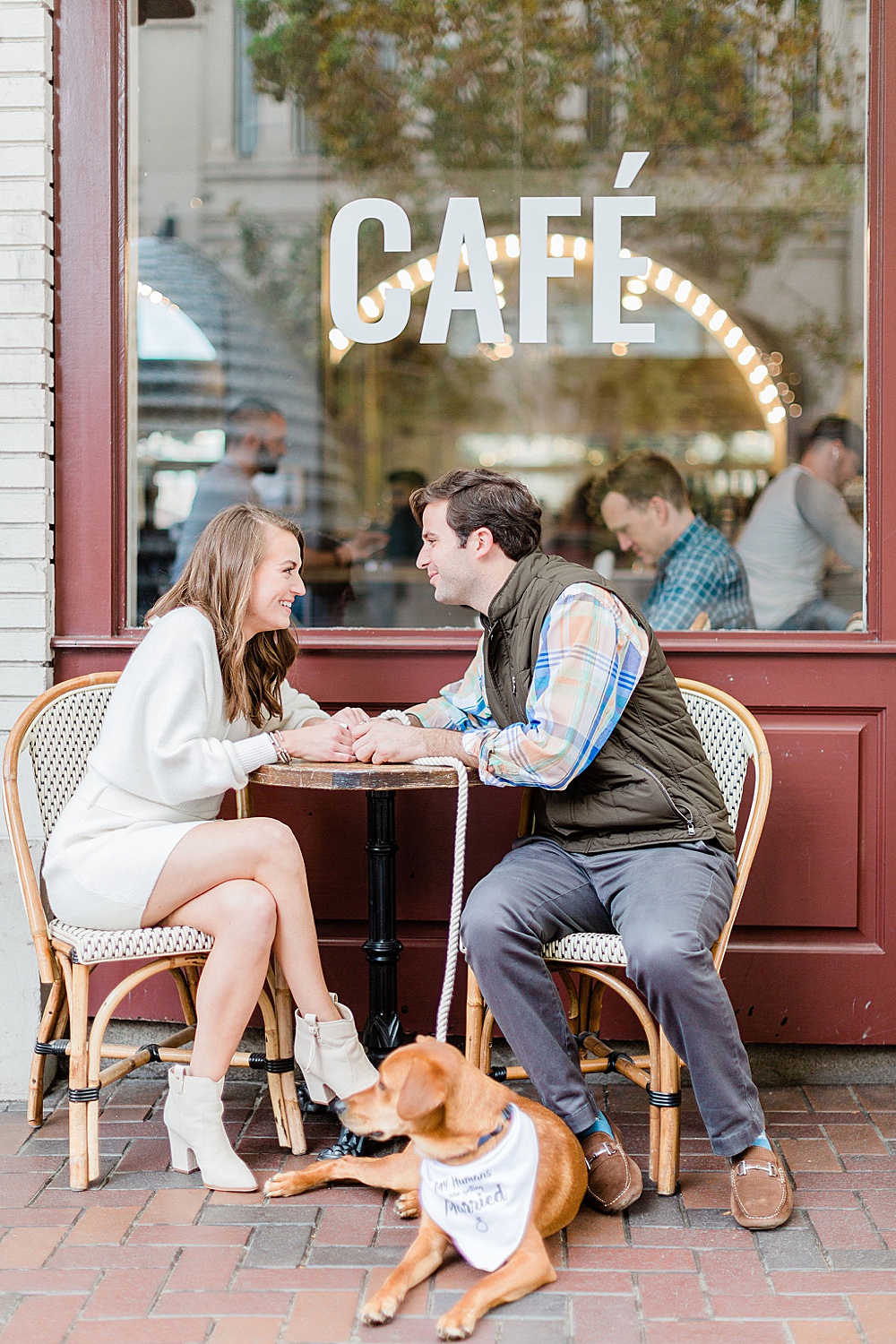 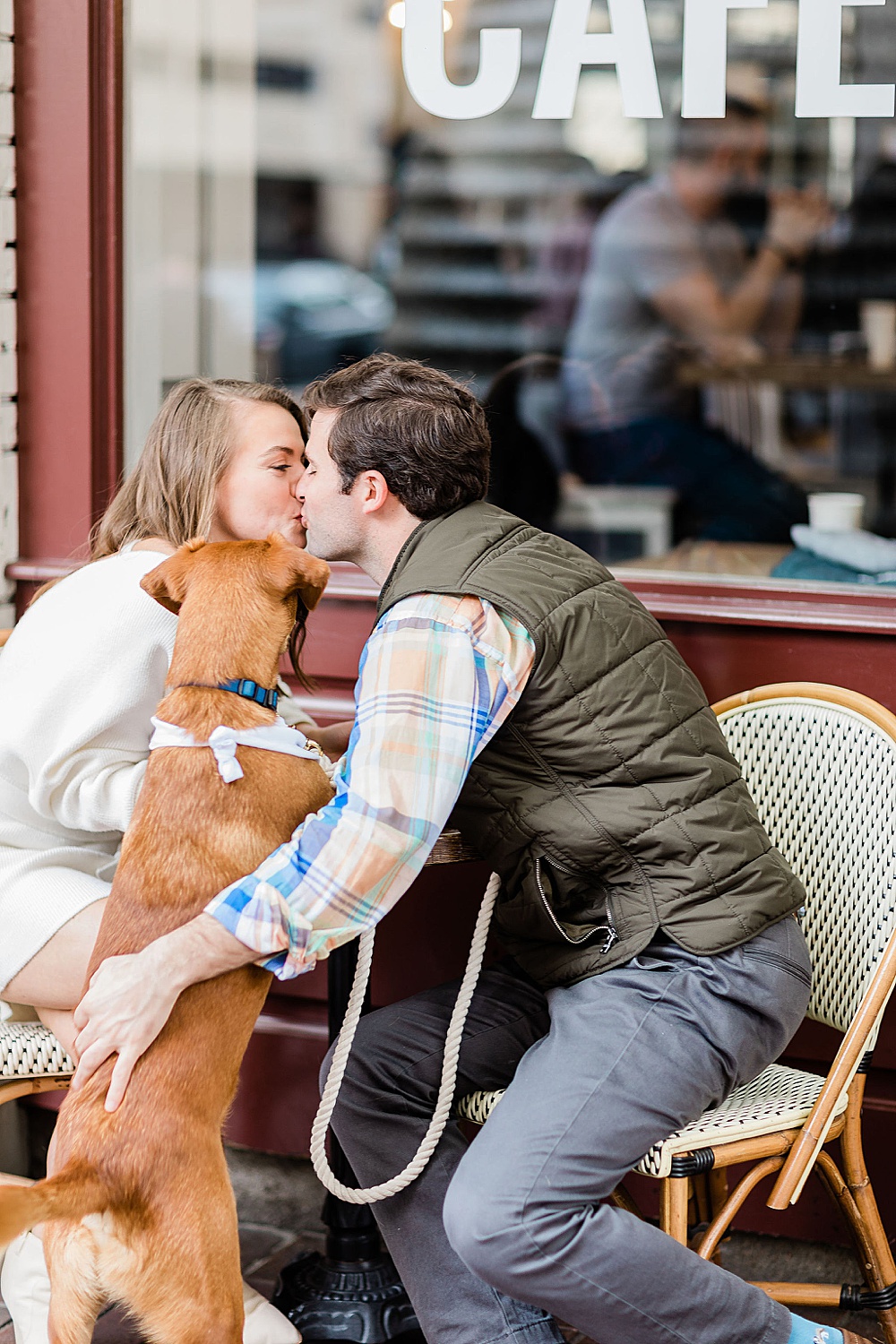 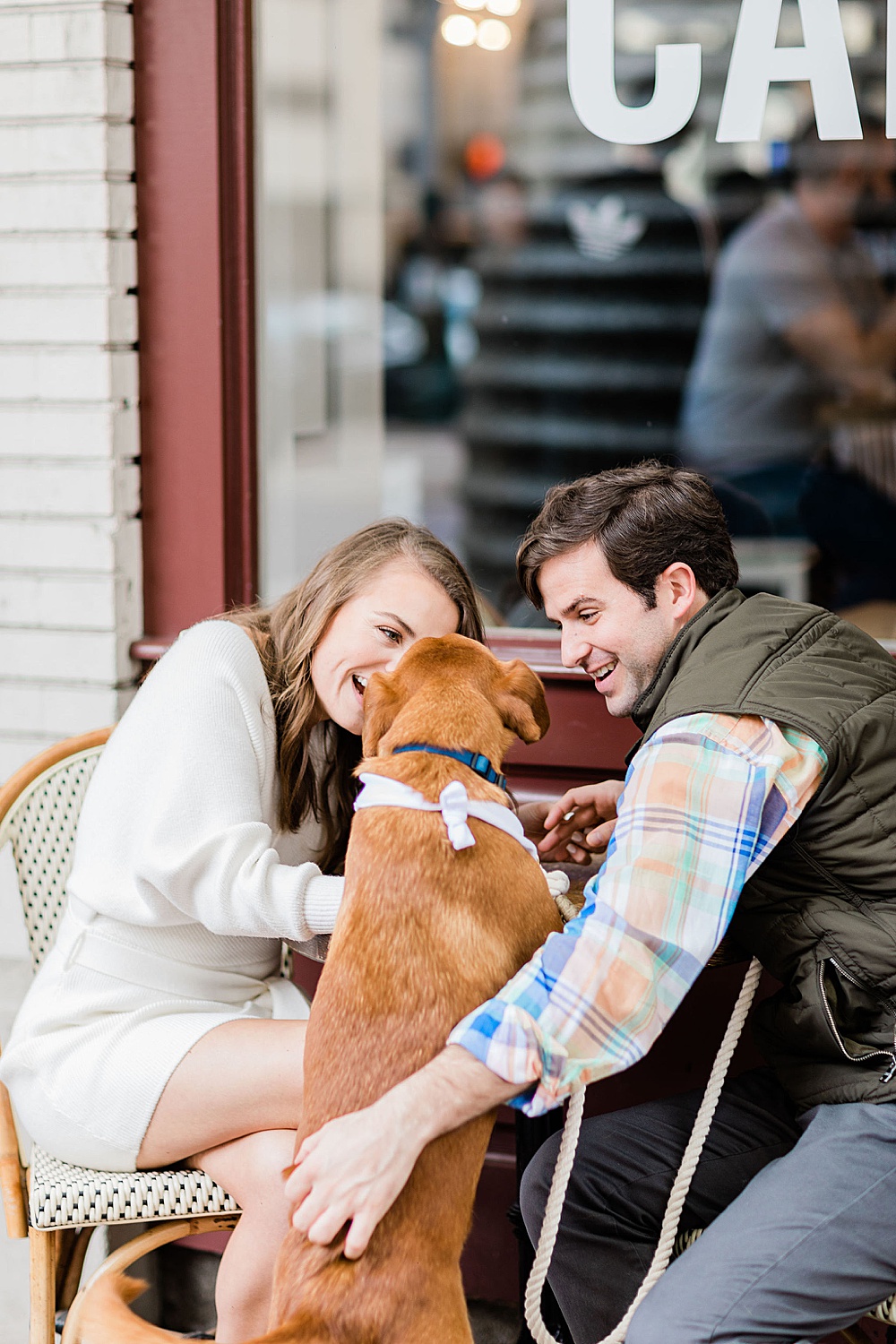 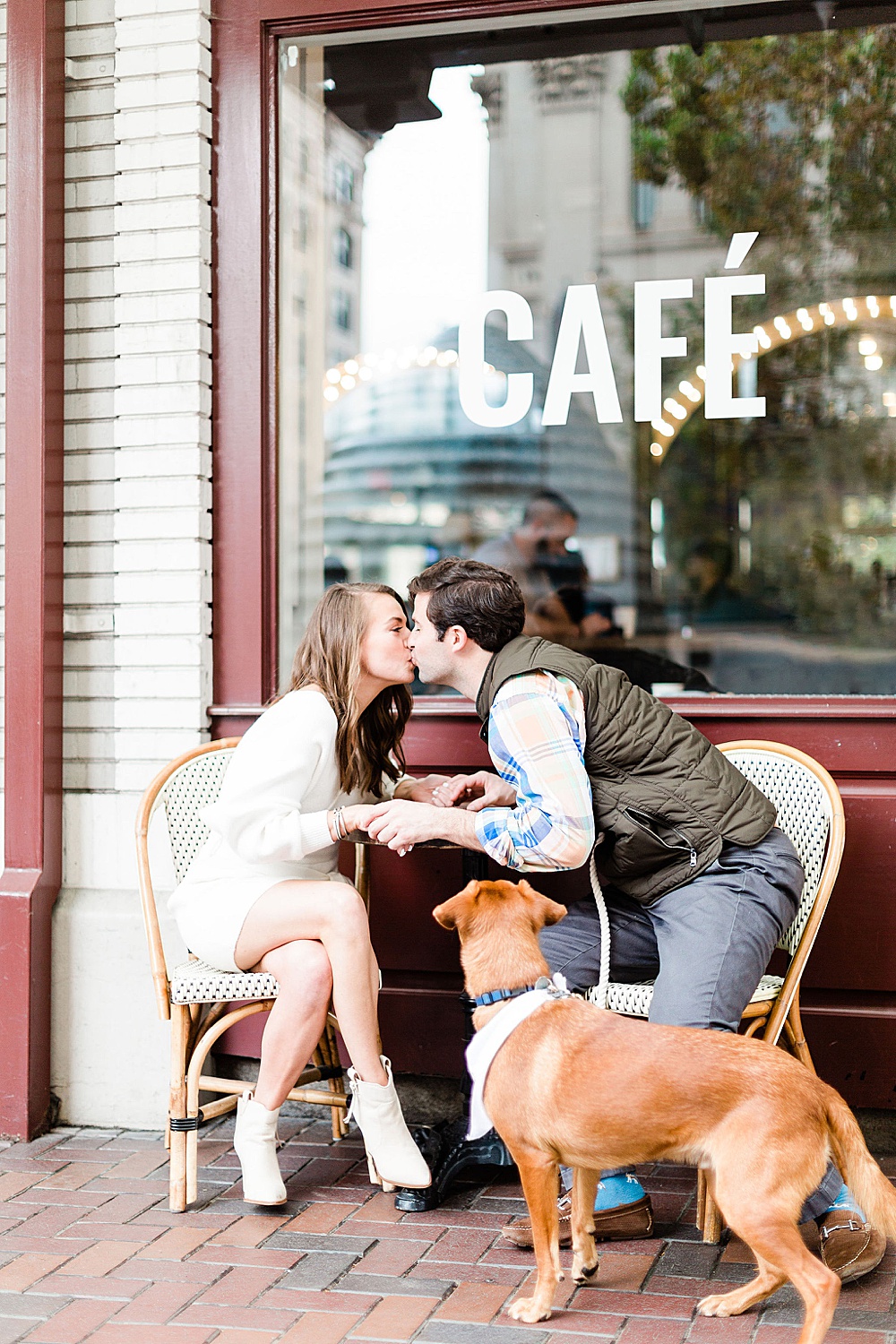 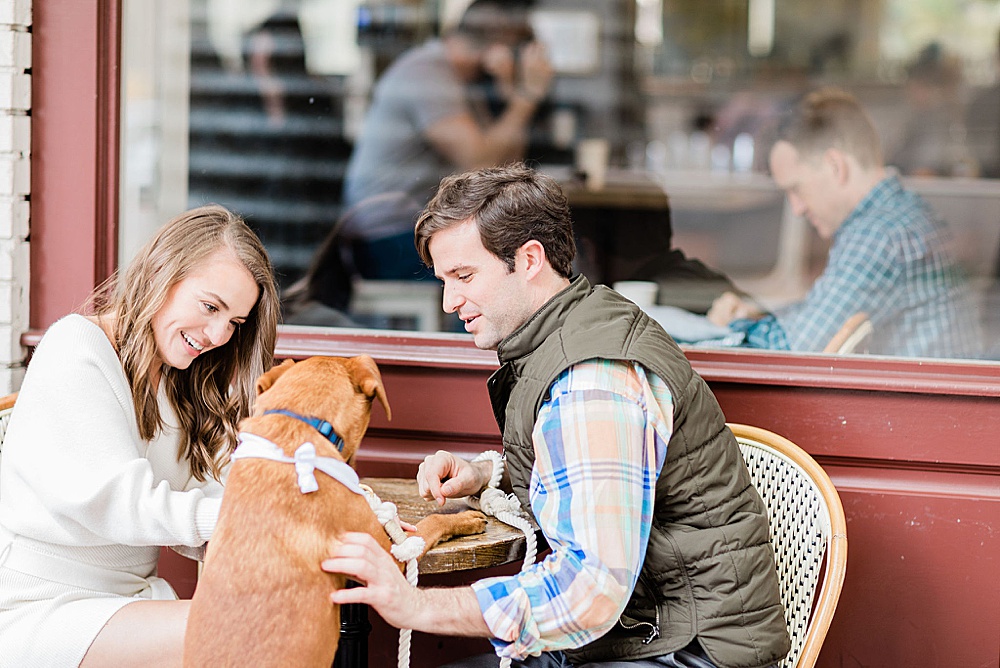 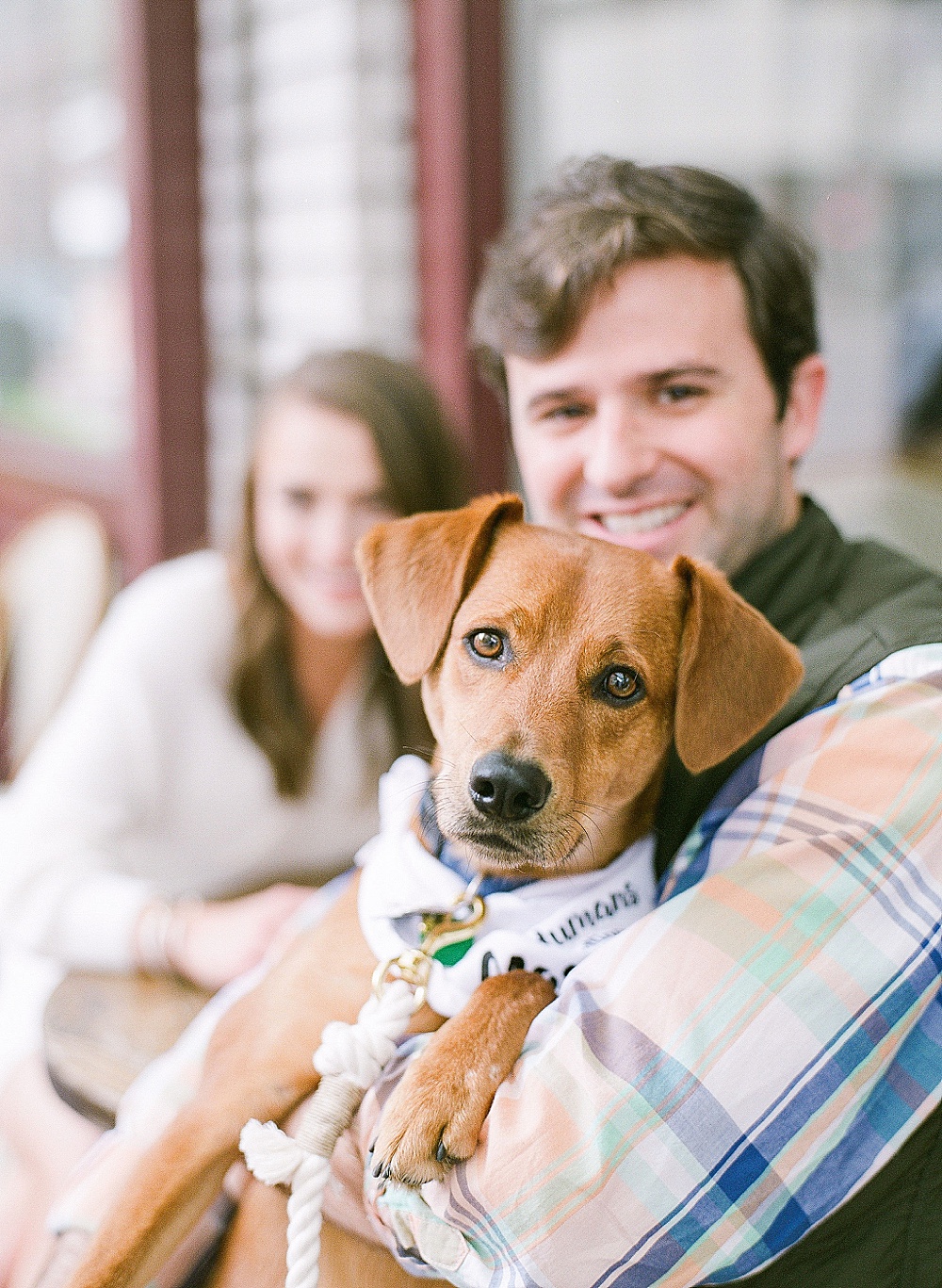 To love, laugher, and their happily ever after🤍

Thankful beyond measure✨”Family life is not ea

Have you ever seen such a beautiful family✨ Nari